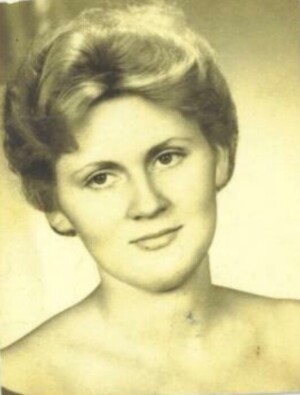 On Tuesday, 16 February 2021, Bonnie Lee Nunley (born Rogers), peacefully passed away at the age of 80 in Gilbert, AZ at her daughter's home as she lovingly held her mother close to her.   Bonnie was the 7th child born on 22 June 1940, Akron, Summit, Ohio, to Harold Walker and Sarah Frances (born Adcock) Rogers.  She was a sharp-tongued, witty, humorous character, a devoted sister to ten siblings, and an intelligent, independent, woman. She had a vivacious personality always saying what was on her mind and had the ability to make people around her laugh.  She was admired not only by friends and family, but also by all who frequented her home.  She was known for her quick wit, her infectious smile, and her kind and compassionate spirit.  June of 1958 she was part of the first graduating class from the new Akron East High School, Akron, Ohio, graduating with a General Business Degree.  She went on to work for Davey Sales while attending the University of Akron.  Later she went to work for B.F. Goodrich for many years while taking care of her home, husband and children.  Bonnie was the loving wife of Charles (Chuck) Neil Nunley for 50 years.  He preceded her in death on 26 August 2011.  They met when he came to visit his cousin, who lived next door to the Rogers family on Elinor Avenue, Akron, Ohio.  She said he was the most handsome man she had ever seen.  They fell in love immediately and were married a few months later 8 February 1961 in Summit County, Ohio.  She was a dedicated mother first and foremost to her two children: Randall Clark Nunley D.D.S., married to Rochelle Grace Coombs of AZ; and Lauri Neil Malolo L.D.H. (born Nunley) married to Aiolupotea Sama Tonumaipea Malolo of AZ.  Bonnie, lovingly known as Nonnie, loved her role as grandma and is survived by them:  Randi Nichole Farnsworth (born Nunley) married to Zachary Alan Farnsworth of AZ; Ryan Mitchell Nunley of AZ; Charles Michael Nunley of AZ; Nicholas James Nunley of AZ; Stacy Moria Malolo married to Pago Togafau of Calif; and Taylor Funefeai Malolo married to Bailey Diane Malolo ( born Coley) of AZ.  Her great grandchildren: Westley Feleti Talivaa Togafau; Faafetai Togafau; Carter Flynn Farnsworth, and Luke Reddington Farnsworth, always brought a beautiful smile to her face, laughter to her heart and an overwhelming joy in the last years of her life.  Bonnie's favorite animals were cows of all sorts. Her first cousin, Elizabeth Mae Quinn (born Majarov) took many summer genealogical trips to Tennessee through the years.  Cows became their mascots. They would see them happily frolicking in the fields as they traveled.  It was humorous to them. They would pull over, talk to them and take pictures as they would laugh.  Bonnie was preceded in death by her husband Chuck, father Harold, mother Sarah, siblings: Gloria Y. Rich of Akron, Eula Doris Henry of Florida, Harold D. Rogers of Akron, Glenn F. Rogers of Calif, Sarah Lorraine Rogers of Florida, Linda P. Fischer of Florida, and Rita L. Rogers of Akron born and died in 1945 a few hours old.  She is survived by sisters: Mary Ina Griffin of Calif; Julia A. Gibson of Florida; Genevieve A. Greathouse of Ohio; and Brenda L. Whitacre of Ohio, plus many nieces and nephews.  Bonnie gave much of herself to all who knew her.  She served many in their time of need never asking for anything in return. She was dedicated to her church and her love of serving many years teaching so many children and youth. She would have out Dum-Dum Suckers and she was called the "Sucker Lady". She was devoted to the care and protection of her mother, Sarah.  Every morning they would go the Tallmadge Recreation Center to walk a few miles.   Who would have ever thought that on the same day when her mother, Sarah, passed away that  22 years later Bonnie would begin her journey to a higher realm on 16 February 2021.  Let us celebrate her life, humor, and joy as we wish her eternal love and happiness.  Our precious Nonnie will be forever missed and loved by all who knew her so well.   Services and interment will take place at a later date in Akron, Ohio.  Richardson Funeral Home, Tempe, Arizona and Eckard Baldwin Funeral Home, Akron, Ohio are both compassionately serving the Nunley family.

To send flowers to the family or plant a tree in memory of Bonnie Lee (Rogers) Nunley, please visit our floral store.

You can still show your support by sending flowers directly to the family, or by planting a memorial tree in the memory of Bonnie Lee (Rogers) Nunley