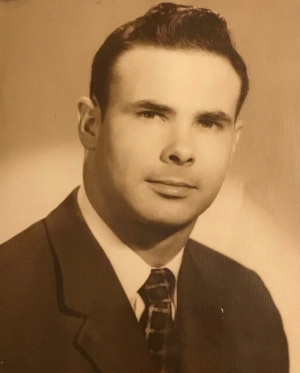 Carl Eugene Vanderbur (Gene), loving husband and father of four, passed away on Friday, September 4th at the age of 88 with family members by his side. Gene was born in Russell, Kansas and at a young age, moved to Sharon Springs, KS where he attended elementary school before moving to Topeka, KS with his family.  After graduating from high school, Gene spent a short time working at the Topeka Air Force depot in the warehouse until he was drafted into the U.S Army and stationed at Ft. Riley Kansas. After two years in the military, he returned to the depot and began his computer career in their newly formed Computer Programdivision. Gene spent his career in computers for GE and Honeywell until he started his own company, which he loved tremendously. This career provided benefits to work and travel to many states and countries with his family.  He met his wife, Marjorie, while in Topeka and together they would travel the world together and live in many states and countries; some with their children and many just the two of them. Gene loved to travel, whether by car, plane or cruise ships. Although they lived in many places, they always called Phoenix home for over 50 years.  Gene is survived by his wife of 63 years, 4 children (Richard, Billy (Nancy), Deanna (Paul) and Eric (Christine), 9 grandchildren (Gytahnna, Natasha, Andrew, Amanda, Tristan, Karl, Laurie, Nicole and Cayman) and 5 great grandchildren (Max, Myles, Merrick, Anastasia and Charlotte).  He is loved and will be missed by many.  A private Celebration of Life was held with immediate family members on September 8, 2020.   Richardson Funeral Home, Tempe, Arizona is compassionately serving the Vanderbur family.

To send flowers to the family or plant a tree in memory of Carl Eugene Vanderbur, please visit our floral store.

You can still show your support by sending flowers directly to the family, or by planting a memorial tree in the memory of Carl Eugene Vanderbur
Share a memory
© 2020 Richardson Funeral Home. All Rights Reserved. Funeral Home website by CFS & TA | Privacy Policy | Terms of Use