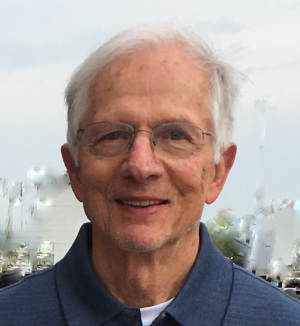 Carleton Wayne Van Deman passed away on the morning of March 3, 2020 at the age of 82.  He is survived by his wife Mary, daughter Catherine, her husband Andy Lloyd, and their son Mason of Phoenix, and daughter Christine Van Deman of Playa del Ray, CA.  He is also survived by his sister-in-law Diane, whose husband Samuel is deceased.
Carl was born to Harold and Leota Van Deman in Wichita, KS in 1937, although he spent most of his childhood in Pittsburg, KS.  He graduated from Kansas State University in 1961 with degrees in Architecture and Architectural Engineering.  It was at Kansas State that he met his future wife, Mary Towner.  The couple wed shortly after Carl’s graduation and they were married for 58 years.  Carl and Mary moved to Phoenix in 1962 where Carl found employment with Phoenix Architect, David Shoulder.  His first Phoenix building was a clubhouse at Papago Park (1962).  He later found a position with the firm of Weaver & Drover (1965), now DWL Architects & Planners.  Carl became a partner in the firm in 1976 and served as President and CEO from 1990 until his retirement in 1999.  During his tenure as President, he guided the firm through one of the most challenging periods in its history.  While he was with DWL, Carl was the lead designer of Terminal 3 at Phoenix Sky Harbor Airport, which opened in 1979, and the Architect in Charge of Design for Terminal 4, which opened in 1990.  Both projects bear witness to Carl’s unique architectural vision.  Carl also played the role of Designer and Principal Architect for several of the original buildings at Midwestern University’s Glendale Campus, including Saguaro Hall and Agave Hall.  His contributions to the architecture of the Valley and the Southwest are numerous and varied.  Ethington Theatre on the Campus of Grand Canyon University, Nobel Science Library at ASU, and the original building for Banner Baywood Medical Center are samples of some of his designs.  In 1989, Carl and DWL collaborated with Architect Will Bruder on the design of the iconic and award winning Phoenix Central Library, which opened in May 1995.  For all of his professional success, Carl remained a quiet and humble man.  Few outside the architectural profession knew of his design contributions to the Valley. Carl was a caring husband and father who was loved and respected by all who knew him.  He was kind, creative, talented, and athletic.  As a young man he excelled in many sports including football, basketball, track, and baseball.  Later in life he enjoyed skiing in Arizona and surrounding states and tennis with friends in Ahwatukee and Sun Lakes, AZ.   In 1984 he took up whitewater rafting and became a skilled boatman exploring many wild and scenic rivers of the Southwest.  In 1986 he piloted his own raft on a 3 week trip on the Colorado River through the Grand Canyon.  Carl will be long remembered and deeply missed by all whose lives he touched.  A memorial service will be held later this fall.

To send flowers to the family or plant a tree in memory of Carleton Wayne Van Deman, please visit our floral store.

You can still show your support by sending flowers directly to the family, or by planting a memorial tree in the memory of Carleton Wayne Van Deman
Share a memory
© 2020 Richardson Funeral Home. All Rights Reserved. Funeral Home website by CFS