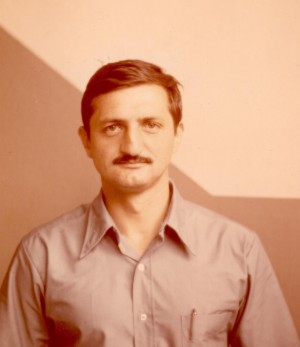 Even though he is now gone and we will miss him very much, I know that he is up there looking over us. Even though he is now gone from this earth, I want him to know that we loved him very much. Ciprian Ilie Foias had a long and extraordinary life. He was also just my father. When my sister and I were young, he used to put each of us on a knee, swing us up and down, and sing: “Tata are doua fete, doua fete cucuiete” to the delighted laughter of the two young girls. He was one of the most brilliant minds in mathematics over the last 40 years, and had an illustrious career. He loved his mathematics, his students and colleagues.

Ciprian Ilie Foias was born on July 20, 1933, in Resita, Romania. He studied mathematics at the University of Bucharest and finished his dissertation in 1957. However, the communist government did not allow him to defend and graduate until 1962 because his father, a respected doctor in Resita who had also been a minor functionary, was sent to a forced-labor camp when the Communist Party took over Romania.  My father began teaching at the University of Bucharest in 1954 until 1958.  In 1958, he was named to the Mathematics Institute of the Romanian Academy, where he taught and conducted research. In 1966 he became professor of mathematics at the University of Bucharest, and in 1968, he was named “doctor docent” in recognition of his already growing international reputation.

In 1978, Ciprian defected while he was at a mathematics conference in Helsinki, Finland. The stories our parents told us about that moment in his life made it sound very exciting and very scary at the same time. With the help of his French colleagues, he left his hotel room in the morning and took several taxis so that the Romanian secret service could not follow him. Then, his French colleagues put him on the plane and when my father got off the plane in France, without a visa, he asked for political asylum. The next year, while he was in France alone, and while we and my mother were in Romania, were torture as there was no certainty that the Communist regime would let us to leave Romania to join him  abroad. But, many people helped, including the French government, the Indiana senators, as well as the mathematician daughter of the Romanian president (Nicolae Ceausescu), who had been one of Ciprian’s students in Romania. After one year, we gained permission to leave Romania. We left our extended family behind, but were given the chance for a better life in United States. After spending 6 months in Paris, France, Ciprian accepted the position of professor of mathematics at Indiana University in Bloomington, Indiana, where he spent the next 20 years of his career. He retired from Indiana University in 2000 at the age of 66.  However, retirement was not for him, and he accepted a teaching position at Texas A&M University in College Station, where he became distinguished professor of mathematics in 2007 until his retirement in 2016.

A prolific researcher as well as a brilliant mind, he received many accolades and awards. He was named distinguished professor of mathematics at Indiana University in 1983. He was inducted in the Hungarian and Romanian Academies of Science, as well as the American Association for the Advancement of Science.  He received honorary doctorate degrees from the University of Timisoara in Romania, and from the Vrije Universiteit in Amsterdam. In 1995, Ciprian was awarded the very prestigious Norbert Weiner Prize from the American Mathematical Society and the Society for Industrial and Applied Mathematics for his extensive research in applied mathematics. In 1995, he was also recognized for his dedication to teaching through the Rothrock Faculty Teaching Award at Indiana University. In 1999, he was named as a Phi Beta Kappa national lecturer. In 2000, he received theBela Szokefalvi-Nagy Memorial Medal from the University of Szeged, Hungary, where his mentor Prof. Bela Szokefalvi-Nagy taught for a long time.

Nothing shows better the love, respect and esteem that his colleagues felt for Ciprian than the establishment of the Foias Lectures in 2014 by two of his colleagues, Professor Emeritus of Mathematics Carl M. Pearcy ’55 and Distinguished Professor of Mathematics Ronald Douglas.  Pearcy and Douglas were joined by other colleagues and an anonymous donor to create a $25,000 endowment through the Texas A&M Foundation.  The 2015 speaker in the Foias Lecture series was Dan Voiculescu, University of California, Berkeley mathematician and one of Ciprian’s students in Romania, one of many students that Ciprian mentored, worked with, and supported throughout his life (from Shana Hutchins, “Texas A&M Mathematicians Honor Colleague with Endowed Lectures Series”, http://www.science.tamu.edu/news ).  Ciprian’s support for his students and love for teaching were also recognized at Indiana University where the Ciprian Foias Prize was established in 1995 by Paul and Miriam Biss, to reflect “appreciation for Professor Ciprian Foias and the Mathematics department for their generosity and talent in guiding the mathematical education of their son, Daniel Biss”  (as described on the Indiana University website https://math.indiana.edu/undergraduate/scholarships-awards/index.html).  He was generous with his time and was beloved by his colleagues and students, who often said that he was like a father to them.

Ciprian contributed to many subfields in applied mathematics. His colleagues and friends Roger Temam and Hari Bercovici enumerate the long list: “spectral theory, dilation theory, evolution equations, interpolations, systems and control theory, fluid dynamics, fractal geometry, ergodic theory, and mathematical economics” (from Ciprian Ilie Foias, In Honor of Retiring Faculty, Indiana University, April 13, 2000).  They continue, “One of the fields in which Ciprian’s contributions are truly seminal is dilation theory. . . . Ciprian’s contributions were also seminal in the approximation theory of linear operators on Hilbert space. This started originally as a study of quasitriangularity, an area where Ciprian’s work constituted an outstanding breakthrough. . . . Students of statistical solutions of the Navier-Stokes equations are indebted to Ciprian for the first existence and uniqueness theorems for the corresponding Hopf equation. This is pioneering work that eventually led to the establishment of the mathematical framework for traditional turbulence theory” (ibid).  To be honest, we don’t understand many of these mathematical equations, but we appreciate that mathematics lost one of its great minds.

My father authored or co-authored 11 books and over 500 refereed professional journal articles, reflecting his extraordinary mind. He had a photographic memory, which made so many of us jealous. He was a true Renaissance man as he was interested in every field of human knowledge and read widely from molecular biology to horse racing to mountain climbing (which was one of his passions) to history. You could ask him about animals or Roman emperors and he would be ready with details. I am sure that I inherited my passion for the pursuit of knowledge from him.  In his twenties and thirties, he loved mountain climbing, and during his last years, he loved to retell stories of his many adventures in the mountains of Romania.  Only he knew the mountains he described to us, and sometimes the tragedies that occurred there: a broken leg, a bad fall, big storms. Later in life, he became passionate about horse racing, and my mother and I often accompanied him driving hours to horse races in Ohio and Kentucky.  Those were the good times when we would celebrate a win of even ten dollars. My father saw it all through the eyes of a mathematician, keeping close accounting of horses, horse trainers, and jockeys.

He loved to travel and when we first moved to the US, we took many cross-country trips that he planned very carefully to ensure we saw as many national parks as possible. Being very thrifty, we ate most of our meals at McDonald's, resulting in a lifelong lack of desire to never eat in McDonald's again, at least in some of us. Farther in the past, I remember long drives in Romania when my father drove my sister and I from Bucharest to Resita where we would visit his family. He loved to be regaled with our song “La Paloma blanca.”

By Antonia Foias (with Dara Foias and Maria Foias)

In lieu of flowers, please share a photo, comment or memory with the family of your time with Ciprian using the 'tribute wall' tab.

To send flowers to the family or plant a tree in memory of Ciprian Ilie Foias, please visit our floral store.

You can still show your support by sending flowers directly to the family, or by planting a memorial tree in the memory of Ciprian Ilie Foias
Share a memory
© 2020 Richardson Funeral Home. All Rights Reserved. Funeral Home website by CFS