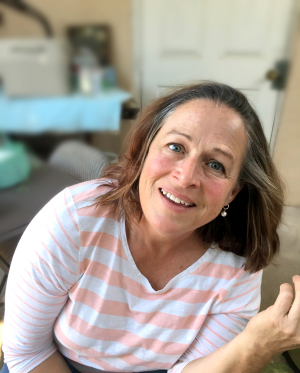 Lisa Ann Courtney-Ramirez, 56 of Mesa, Arizona passed away on November 18, 2019 at Hospice of the Valley-Friendship Village, Tempe, Arizona.  She was born on November 21,1962 in Dearborn County Hospital, Lawrenceburg, Indiana the day before Thanksgiving to Gerald Courtney and Sherry Lee (Cole) Courtney.  Lisa lived with her parents and her brother, Randy, on the farm of her grandparents, Alvin and Kathleen Cole, until she was 2 years old. The family moved to Kokomo, Indiana and there she attended grade school and Kokomo High School until she left to attend Rick’s College, Idaho for a year and a half.  She moved to Washington State to live with her friend since high school Mona Warner.  She met her future husband, Michael Stumpo in Washington State.  They were united in marriage on October 2, 1982. Michael, being in the military service, was then sent to San Antonio, Texas where they had their 1st child, Lara Kathleen, on November 1, 1983. Mike and Lisa had two more children, Joseph Richard on June 19,1985 and Christopher Michael on June 16, 1986.  Lisa and Mike divorced after she had come home to stay with her parents during the Gulf War and found herself with 3 kids to care for, no job, and needing to work full time and to go to school at Indiana University-Kokomo in Kokomo, Indiana. She took a three year course and finished it in two, receiving her nursing license.  Now with an RN after her name, she sought employment as such and has worked as a nurse for almost 30 years.  Caring, loving, serving, respecting, and helping, even saving lives due to her unique talent of being aware that there was more to the situation than met the eye. She worked in every department learning all the telemetry and protocol, thus being knowledgeable enough to be able to work wherever she wanted, even being director of nursing at some of the hospitals.  On July 6, 2007, she was married to Juan Borbon Ramirez,  thus adding a daughter, Paloma, a granddaughter, Melanie and three grandsons, Leslie, Saul, and Niram by marriage.  Lisa loved animals and had quite a collection of cats, dogs, and horses wherever it was possible.  She became a grandmother when her son, Joseph and his wife, Molly Brennan-Stumpo had a son on April 12, 2010, that they named Michael Adyn.  Her daughter Lara Munoz and her former husband, CJ Munoz  had a baby girl, Luna Ariadne on January 26, 2013.  Then John Thor was born to Joe and Molly on June 26, 2014 and Joseph Odin was born on September 29, 2016.   Her dream of owning her own ranch was in motion when she acquired 40 acres in Prescott Valley near Seligman, Arizona.  She was in the process of doing the soil tests and setting septic tanks when she fell ill and went to the hospital to find out that she had a rare terminal cancer and it had metastasized.  After 5 months of fighting and trying everything possible, she succumbed to the terrible disease on November 18, 2019, just 3 days before her 57th birthday.  Her life was short but she really lived her life.  She was a joy and an uplifting spirit wherever she went.  She was a hard worker and expected that from others.  She was a kind, loving heart, great sense of humor, and almost always had a positive attitude.  She had fun and she was fun.  She was very blessed with a fantastic artistic talent.  She has painted in oils, done sculpting, stained glass, ceramics, clay lift, porcelain, and wood working.  She was preceded in death by her sister, Michelle Rene’ Courtney, and grandparents, Hazel Marie (Bruce) Courtney, Lora Kathleen (Shoemaker) Cole, and Alvin H. Cole  She will be sorely missed by her parents, children, her big brother, Randy Courtney and his spouse, Marcelina Duarte Potter, grandchildren, nieces,Jasmine M Potter, Trinity A Potter, Nicole Courtney and Selen Courtney, (wife of Trevor); nephews, Trevor Courtney and Maximus Courtney, and Gary P. Potter II; aunts, Karen Kelleher and LaVerne Bailey; uncles, David Cole, Richard Cole and Paul Kelleher; many cousins, especially Angela Splain; numerous friends and associates.  A visitation will be held on Thursday, November 21, 2019 from 6:00 pm to 8:00 pm at Richardson Funeral Home, 2621 South Rural Road, Tempe, Arizona.  A Celebration of Lisa's life will follow on Friday, November 22, 2019 at 11:00 am, with a visitation starting at 10:00 am, at The Church of Jesus Christ of Latter-day Saints-Udall Ward, 15 West 1st Avenue, Mesa, Arizona.  Graveside services will follow at 1:00 pm on Tuesday, November 26, 2019 at Vevay Cemetery, Vevay, Indiana.  Lisa's family requests anyone that will be attending either the visitation or celebration of life service please refrain from wearing anything dark in color.  Lisa was a vibrant person and they would like everybody dressed in bright colors.  In lieu of flowers memorial contributions in Lisa's name may be made to any of the following organizations:  East Valley Animal Care and Control, 2630 West Rio Salado Parkway, Mesa, Arizona 85201, Arizona Equine Rescue Organization, 34522 North Scottsdale Road #D7-168, Scottsdale, Arizona 85266, Hospice of the Valley, 1510 East Flower Street, Phoenix, Arizona 85014 or The American Cancer Society, 4550 East Bell Road #126, Phoenix, Arizona 85032.  Richardson Funeral Home, Tempe, Arizona and Haskell-Morrison Funeral Home, Vevay, Indiana are both compassionately serving the family.

To send flowers to the family or plant a tree in memory of Lisa Ann Courtney-Ramirez, please visit our floral store.