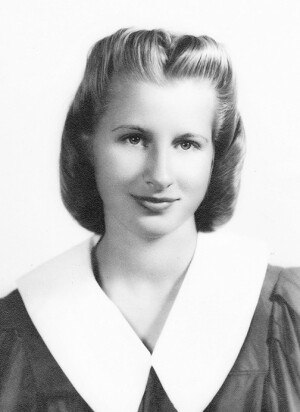 Ruth Schader Karcz was born on December 20th, 1922, in Oakland, California.  Her parents, Bertha and Sejbrandt Schader, moved from Sweden to California in the early 1900s.  Ruth was the last remaining of 13 siblings: three girls and 10 boys.

Ruth attended elementary school in Oakland and graduated from high school there in 1941.  She had fond memories of playing in the wooded river areas of sparsely-populated Oakland as a child, close to nature in a pristine setting.

Shortly after graduating from high school, she moved to Chicago, Illinois, and began working in a War Bonds office.   There she met her future husband, Edward C. Karcz.  Ruth and Ed greatly enjoyed each other’s company, visiting different ethnic areas in Chicago and sharing many interests, such as movies and live music.  Ruth and Ed were married on March 25th, 1944.  They moved to Tempe in 1947, where she and Ed raised their two children, Linda and Gary.

Because Ruth was a long-time resident of Tempe and a dedicated educator in the local school district for 25 years, Tempe Mayor Mark Mitchell declared December 20th, 1990 as Ruth S. Karcz Day, in her honor.

Ruth was actively involved in her community, as a member of many different organizations.  Some of these include: VP, President and various chairmanships for Tempe BPW (Business and Professional Women); Elected to Delta kappa Gamma, an honor society for educators; Elected to Pi Lambda Theta, an international honor and professional association in education; Member of the National Association of Elementary School Principals; Member of Arizona School Administrators; Treasurer and Executive Board Member of Family Service of Tempe; Elected to the Executive Boards of Tempe United Way, Tri-City Urban League and Family Service of Phoenix; Member of AAUW (American Association of University Women); Volunteer for Hospice of the East Valley; and a longtime member of the First United Methodist Church in Tempe.

Ruth had a quick, sharp wit—a ‘Schader’ humor—that was subtle, profound, pointed and often disarming.  She was also a world traveler, visiting many places, including Antarctica, China, European Countries, Japan, Poland, Russia, South America and Sweden.  Ruth and Ed took their children, Linda and Gary, on many road trips across the U.S. during the summers.  When her grandchildren were old enough, they accompanied her to different places in the U.S.  And, throughout the many different things that she did during her life, there was another passion that burned brightly: Ruth loved to dance.

At the top of Ruth’s wonderful qualities was her unconditional love for her children, grandchildren, great-grandchildren, friends, students and co-workers.   Her two Schnauzer dogs, Boo Boo and Heidi, were her cherished companions and ‘children,’ too.  She loved and cared for them deeply, providing a warm, safe home for both—expecting nothing in return.  Unconditional love was part of Ruth’s fabric and she bestowed this upon all, in equal measure.  As an educator, she often taught by example.  As a person, she set the bar high with her unwavering unconditional love.

To send flowers to the family or plant a tree in memory of Ruth (Schader) Karcz, please visit our floral store.