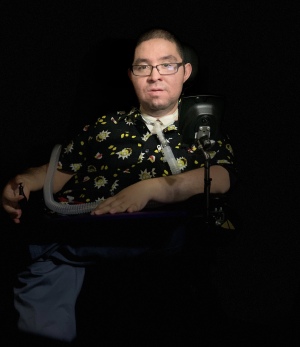 Vicente "Tito" Rodriguez Jr, 32 of Phoenix, Arizona passed away on July 3, 2020 at Banner Estrella Medical Center, Phoenix, Arizona. Vicente “Tito” Rodriguez Jr. was born on September 11, 1987 to his father Vicente Rodriguez and his mother Maricela Rodriguez. He has one brother, Ernie Rodriguez. Tito was diagnosed with muscular dystrophy at birth. He went through many struggles and tribulations throughout his life but he always remained positive. The doctors gave him a life expectancy of 18, but by the grace of God, he lived until the age of 32.  Tito’s greatest wish was to find true love, for he thought no one would love a person with a disability. He was blessed to find the love of his life, Raquel Antillon. They met in high school and soon after graduating, they became husband and wife on November 25, 2006. Raquel was an angel sent from heaven; she took care of him beyond the abilities of any normal person. Raquel and Tito shared so many memories and she never left his side. The love that she had for him was immeasurable; their love story is truly one for the ages. It is believed that the reason why Vicente lived as long as he did was because of the love they shared for each other.  Vicente had other angels in his life that helped him in his most difficult times. He was loved by many people and is survived by everyone who he has inspired and will continue to inspire. Vicente is a testament that no matter how hard or how difficult times may be, we all have the power to push forward and find the light in the darkness..  Richardson Funeral Home, Tempe, Arizona is compassionately serving the Rodriguez family.

To send flowers to the family or plant a tree in memory of Vicente "Tito" Rodriguez Jr, please visit our floral store.

You can still show your support by sending flowers directly to the family, or by planting a memorial tree in the memory of Vicente "Tito" Rodriguez Jr
Share a memory
© 2020 Richardson Funeral Home. All Rights Reserved. Funeral Home website by CFS & TA